Hot off of seeing Kong: Skull Island I decided to spend my weekend in the best way possible. Not working.

Taking a paid day off of work has allowed me time to spend time on time wasting activities. Such actives are as followed: Watch Ghoulies Go To College, Godzilla Raids Again, and 1995’s Evolver (reviewing this beautiful pile of shit soon). But the bulk of my day was focused on the headline of this article – finding Cool King Kong Stuff!

The keyword is STUFF. Boy, did I find some really awesome stuff! So grab your adventure gear and follow me as I take you on a wild adventure Kong stuff…what a weird word…stuff…

I found this awesome blog called, Tokyo Fox. The blog is written by a gentleman who seems to be a modern Indiana Jones! I was scrolling on his Godzilla adventure and found this…

Leave it up to Japan to have the coolest building in the world! King Kong coming out of FamilyMart. So freaking cool!

The Ebay Machine has a million awesome Kong items. So selecting the most interesting piece was hard. I ended up using a mathematical equation that included Kong+Advertising=second choice. Lo! I present to you Red Robin Kong Burger Sign! 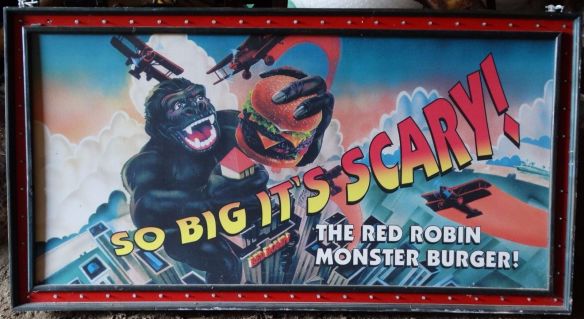 I would totally buy this amazing piece of advertising. That is if I had a cool $1,500 to spare. Oh well, at least I can right click and save this delicious image.But just look at it! Kong on top of a Empire State Building, holding a tasty burger while smiling as the awesome copy reads, So Big It’s Scary. What else could you want?!

I remember being a kid in Chicago and seeing a giant King Kong inflatable on Irving Park road. He’d always be in front (or on top) of a car dealership. I remember driving with my Grandparents and cowering in fear. My Grandpa would assure me that he would shoot the monkey with a bow and arrow. No joke. Gramps was major dick. Anyway, I find it awesome yet odd that Kong is associated with car dealerships. To this day you can find various Kongs peddling cars like the greasy ape he is.

The year was 1977. The music world was a bottomless ocean of audible treasures. But nothing can come close to Barry, “Prince of Pillow talk” White’s funky orchestral creation entitled Theme From King Kong. I can only imagine this was influenced by 76′ Kong and it’s impact it had on everything. This will be my alarm, forever.

Collecting Kong is an expensive hobby. This means when I come across Kong related treats I must exercise extreme financial caution. Most of all I must not be drinking nor fed after midnight when surfing the web. This will ultimately cause me to purchase all Kong related items on earth. This is a sad fact of a 28 year old geek. Let us begin the display!

This bad boy is a Universal Studios Kongfrontation pass! When I stumbled upon this guy during a midnight Kong search on Ebay, I knew I needed. The defunct ride will always hold special place in my heart. The ride thrilled me. I remember going on the ride and thinking that the giant Kong animatronic just might come alive this time around. I was certain of it. Those stupid little childish thoughts come flooding back when I look at the art on the pass. I sure do miss those days. 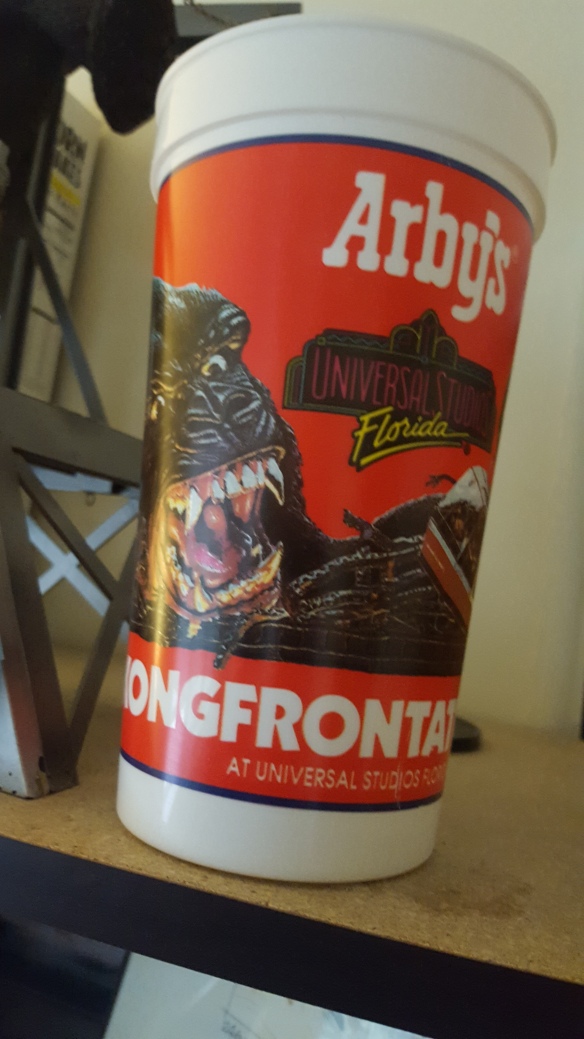 My second Kong collectible comes from Arbys when they promoted Kongfrontation! I won’t lie. I have no memory of ever eating Arbys during the Kongfrontation years. I am not a fan of Arbys. I feel like the meat is secretly thinly sliced human flesh soaked in various sauces. That’s a personal problem. But I love this awesome cup!

My third piece is a combo of my kick ass Todd Mcfarlane Kong figure AND my 2005 box of Kellogg’s corn flakes cereal!

I picked up the Kong figure at a flea market in Chicago. I talked the guy down to $12 bones! I felt bad but I pretended I had no idea what this was. No shame in my hunting game. The sculpt is amazing. The find was even better!

Now, let me explain the box of 12 year old cereal. Back in high school I purchased this box of cereal because of Peter Jackson’s King Kong flick. But my objective was far more advanced! On the side of the box was a redemption code for a kick ass kong t shirt. You best believe that I mailed the coupon out. Within a couple of weeks I was rocking the awesome Kong Kellogg’s shirt. The shirt is lost. I miss that shirt. I just might purchase it again on ebay…

Well it’s all over. I hope you enjoyed this journey of random Kong stuff. I hope this triggered your wallets to cough up the cashmoney to see Kong:Skull Island. It’s the best monster movie in decades. DECADES! Don’t believe me? Just check out It’s Alive Horror Podcast and their thrilling review.